Have you ever tweeted out a hastag, and discovered a small image attached to the side of it? It could be for #StPatricksDay, #MarchForOurLives, or whatever #白白白白白白白白白白 is meant to be. These are hashflags.

A hashflag, sometimes called Twitter emoji, is a small image that appears after a #hashtag for special events. They are not regular emoji, and you can only use them on the Twitter website, or the official Twitter apps. For example:

#MondayMotivation: #CNY celebrations are like a marathon not a sprint. Keep up the festive momentum and celebrate with the #CNY emoji using the below hashtags from now until Mar 2nd. #YearOfTheDog #LunarNewYear #GongXiFaCai #狗年旺旺#新年快乐#恭喜发财

If you’re a company, and you have enough money, you can buy your own hashflag as well! That’s exactly what Disney did for the release of Star Wars: The Last Jedi.

If you spend the money to buy a hashflag, it’s important that you launch it correctly—otherwise they can flop. #白白白白白白白白白白 is an example of what not to do. At time of writing, it has only 10 uses.

Hashflags aren’t exclusive to English, and they can help add context to a tweet in another language. I don’t speak any Russian, but I do know that this image is of BB-8!

Unfortunately hashflags are temporary, so any context they add to a tweet can sometimes be lost at a later date. Currently Twitter doesn’t provide an official API for hashflags, and there is no canonical list of currently active hashflags. @hashflaglist tracks hashflags, but it’s easy to miss one—this is where Azure Functions come in.

It turns out that on Twitter.com the list of currently active hashflags is sent as a JSON object in the HTML as initial data. All I need to do is fetch Twitter.com, and extract the JSON object from the HTML.

I wrote some C# to parse and extract the activeHashflags JSON object, and store it in an Azure blob. You can find it here. Using Azure Functions I can run this code on a timer, so the Azure blob is always up to date with the latest Twitter hashflags. This means the blob can be used as an unofficial Twitter hashflags API—but I didn’t want to stop there.

I wanted to solve some of the issues with hashflags around both discovery and durability. Azure Functions is the perfect platform for these small, single purpose pieces of code. I ended up writing five Azure Functions in total—all of which can be found on GitHub. 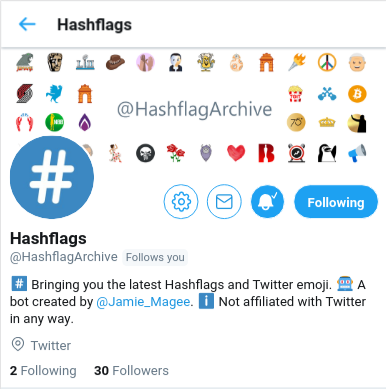 So this is great, but there’s still one issue—how to use hashflags outside of Twitter.com and the official Twitter apps. This is where the JSON blob comes in. I can build a wrapper library around that, and then using that library, build applications with Twitter hashflags. So that’s exactly what I did.

I wrote an npm package called hashflags. It’s pretty simple to use, and integrates nicely with the official twitter-text npm package.

I wrote it in TypeScript, but it can also be used from plain old JS as well.

So there you have it, a quick introduction to Twitter hashflags via Azure Functions and an npm library. If you’ve got any questions please leave a comment below, or reach out to me on Twitter @Jamie_Magee.